Be Nice to your Staff.

Note to self, provided that self owns a gleaming Ferrari and also has potentially disgruntled employees with access to 18-wheelers: Never piss off one of your truckers, especially if he or she has an axe to grind and several tons of machinery at their disposal. Take the experience of this trucking boss outside of Chicago to heart—the poor thing just had a semi-truck park on top of their Ferrari GTC4Lusso. 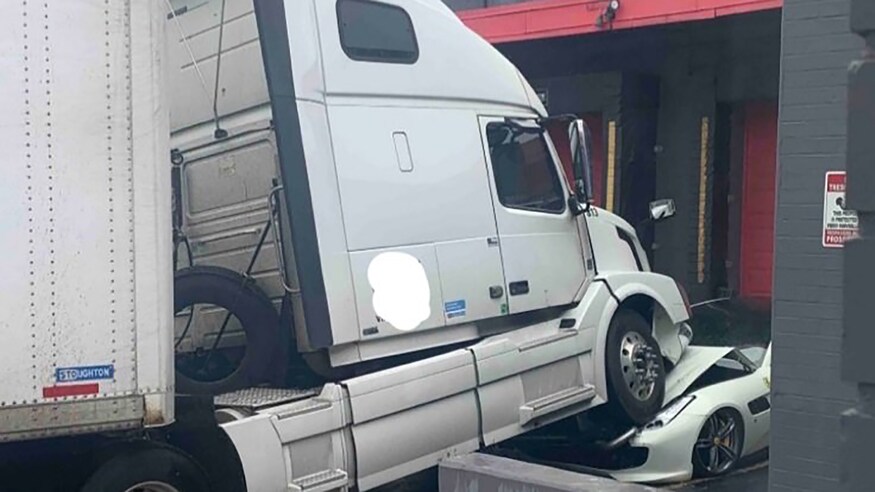 According to Carscoops, here’s what went down via an unnamed source: A newly hired and “not deemed fit (or stable) for the job” truck driver—um, clearly—was let go after hauling only one load. After trying in earnest to keep his job, and despite the trucking company’s amicable attempts to part ways and fully compensate the man, the fired driver calmly asked the owner if the Ferrari was his car. The owner confirmed it was, to which the trucker added “now you’ll see what happens when you [email protected]*&! with me,” according to the site’s source. Now, for those Ferrari owners out there who also own heavy equipment businesses and like to park your cars on site, this was probably, definitely the tip-off that something bad was about to go down.

The trucker allegedly ran towards a nearby truck, got in, laid down some serious tracks, and after nearly running over the unlucky owner, used the Ferrari’s hood as a de-facto ramp. As you can see, the truck ended up atop the GTC4Lusso. The police were, of course, called to the scene and the disturbed trucker was arrested.

However, there are several conflicting reports on social media and Reddit about the circumstances leading up to the smooshed Ferrari. Despite Carscoops‘ account, some accounts maintain the driver was not properly paid, while another says the driver was upset at having to drive an older truck instead of a newer one. For now, it is all hearsay, and this is all we know about the tragedy at the moment. But we think the photos say it all, unfortunately.

The Ferrari GTC4Lusso—when not crunched, wearing a giant truck as a hood ornament—is one sweet machine and even keeps on going throughout winter, thanks to its everyday friendly all-wheel drive. Under the semi’s front wheels, one is likely to find what’s left of its massive 6.3-liter V-12 engine that was (formerly) good for 680 horsepower and 514 lb-ft of torque. The V-12 is mated to a possibly salvageable seven-speed dual-clutch automatic transmission. We imagine the owner must have dropped at least $300,000 for the Ferrari, and hopefully its insurance is all up to date.

Folks, please remember to play nice out there and don’t upset truckers—especially during a full moon. And truckers, or pretty much anyone else in a frustrating, end-of-employment situation (not uncommon these days), try to avoid running over your bosses’ expensive cars. Stay safe, sane, and check out our big gallery below of some untarnished GTC4Lussos in the gallery below.